The 2018 midterm elections are crucial for Republicans and may be as important as the 2016 presidential election. Midterm elections, especially in recent history, have been disappointing for the party controlling the White House. With the prediction by many of a blue wave occurring in November, the Republicans could easily lose control of the Senate. Even the race between Ted Cruz and his Democratic opponent Beto O’Rourke has proved a blue wave is possible, as polls show the race is considered a “toss-up.” Although there is a question on whether polls can be trusted after the 2016 election, they definitely shouldn’t be ignored. Both political parties are acting as if this election is more important than any election prior. Although this may be an over exaggeration, there are plenty of important issues that can be determined depending on who becomes the majority in the Senate chambers.

Democrats are saying that this election is existential because it gives them the ability to limit the powers of the Trump administration and potentially reverse key Trump policies. Talks of reversing the Tax and Jobs Act of 2017, the decision on the Paris Climate Accord, and the Trump travel ban have been brought up by Democrat party leaders. On the other side, Republicans are embracing Trump and running on the ideas of protecting what Democrats seek to repeal. Many of these topics may just be talking points for Democrats and Republicans, but it’s clear the Democrats platform consists of resisting Trump and his policies while Republicans are embracing the Trump administration.

However, the most important issue that has been brought up for two years between Democrats and Republicans is the appointment of Supreme Court Justices. What the United States has witnessed over the past two years has been the politicization of the most powerful court in the land. The games being played around the confirmation of Supreme Court Justices has been nothing but disgraceful for both sides of the aisle. Whether this is proof of humans being inherently self-interested and selfish, the argument truly becomes terrifying if those who side with party over country take the majority. With the power of judicial review, the Supreme Court is objectively the most important branch of government to protect the ideas embodied within the Constitution. As America has seen in the past, the Supreme Court has upheld traditional values, including those of gun rights and free speech. However, the Supreme Court hasn’t always been the defender of lady liberty, especially including that of affirmative action and dehumanization of the fetus. As with 2016, the Supreme Court is currently the most vital domestic reason to vote for a certain political party, as it will be for the foreseeable future.

Although not everybody believes polls are accurate, what are they saying? What are the possible outcomes for Congress? According to Real Clear Politics, there is a total of 36 “toss-up” races in the House and a total of 8 “toss up” elections in the Senate. It is likely that the Republicans will hold control of the House, but the Senate is a different story. Democrats are claiming that there is going to be a blue wave, but in order to take control of the Senate they would need more than just a “blue wave.” Republicans only need to win 9 Senate races to keep the majority in the Senate

As stated prior, it is expected Republicans will keep control of the Senate and will gain a seat. Of the “toss-up” states, Republicans are likely to win Texas, Tennessee, Indiana, and Missouri, while Democrats are likely to win Montana, Nevada, Arizona, and Florida. Overall, these predictions show that Republicans would net gain one seat by picking up the states of North Dakota, Missouri, and Indiana. Although Missouri and Indiana are currently “toss-up” states, they might become more Republican-leaning closer to the election, especially since Donald Trump won both states by over 10% in the 2016 presidential election. 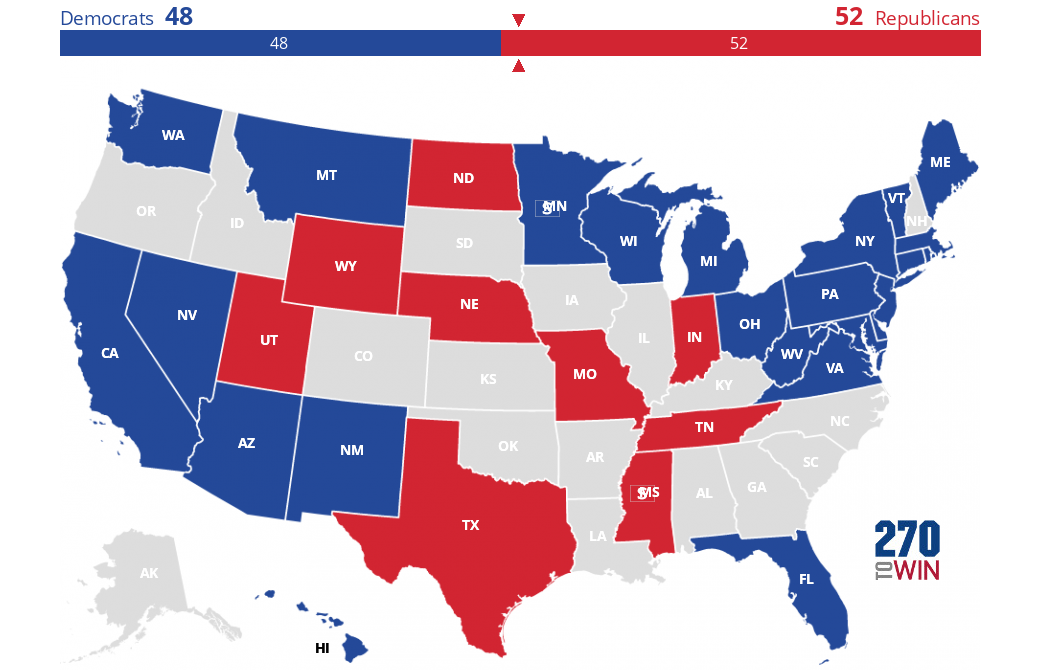 On the other hand, it’s likely that Democrats will flip both Arizona and Nevada. With Arizona’s open Senate seat being left by Jeff Flake, it is probable that the state will turn blue, considering that Flake is disliked by many conservatives, mainly due to his negative view of Donald Trump. Nevada, a state that voted for Hillary Clinton in 2016, could be gained by Democrats, particularly due to the incumbent, Dean Heller, is seen by many in the Republican party as a RINO. Heller, much like Flake, is an anti-Trump Republican, which combined with pro planned parenthood statements, doesn’t sit well with the Republican base. It should be noted that Hillary Clinton won Nevada in 2016, but by a close margin of less than 3%.

Although Republicans are likely to continue to hold control of the Senate and House, there are still concerns that need to be addressed. Republicans need to elect likable candidates. The Republicans can’t run a moderate candidate that is indeed liberal leaning and expect to have a positive outcome. Popular candidates, including Ted Cruz and Rick Scott, have a hard enough road ahead of them regarding the election, but imagine if some quasi-moderate candidate that claimed to be conservative ran in their place. If Republicans want to continue to win elections, they need to stop supporting candidates with troubled pasts, and support candidates with positive track records. The current state of the Union is safe from a radical take over, but the Republican party needs to wean out the RINOs and the “so-called” conservatives out if they intend to continue success in the future. Fully embracing the conservative ideology seems like the best strategy for the Republican party moving forward.

PAI is a think tank devoted to research and analysis of political, philosophical, economic, social, and cultural issues from a uniquely Midwestern perspective. We are grounded in the principles of classical conservatism, which has roots in the very foundation of Western civilization and the classical period.